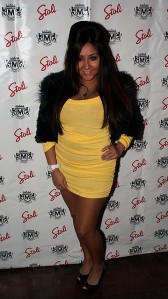 Snooki’s pregnancy has stirred up the news…she and her boyfriend are engaged and according to US Weekly she is 15 weeks into her pregnancy.

As one of the “stars” of Jersey Shore, viewers have seen her at her worst…but now she is pregnant. What will that mean to the girl known for partying and speaking her piece on television?

Hopefully, she will use this pregnancy to show her fans and viewers what a responsible woman’s choices are when it comes to drinking and eating during pregnancy. Apparently, she was drinking before she knew she was pregnant…that is common…as many women do not know they are pregnant and continue to party and drink. Continuing to drink after learning that you are pregnant is a problem  and can cause difficulties for early embryonic development and later fetal development.

Ideally, if you are planning or trying to get pregnant it would be wise to stop drinking…although some physicians do permit some alcohol during pregnancy the American College of Obstetricians and Gynecologists do not agree with this.

via Alcohol and Pregnancy.

Having a baby is a huge responsibility and Snooki deserves a chance to enjoy her pregnancy and her baby. In general, we are very critical when some support is actually needed. Remember that Jersey Shore is a product of the media and lets hope she has a life outside of her “brand”.