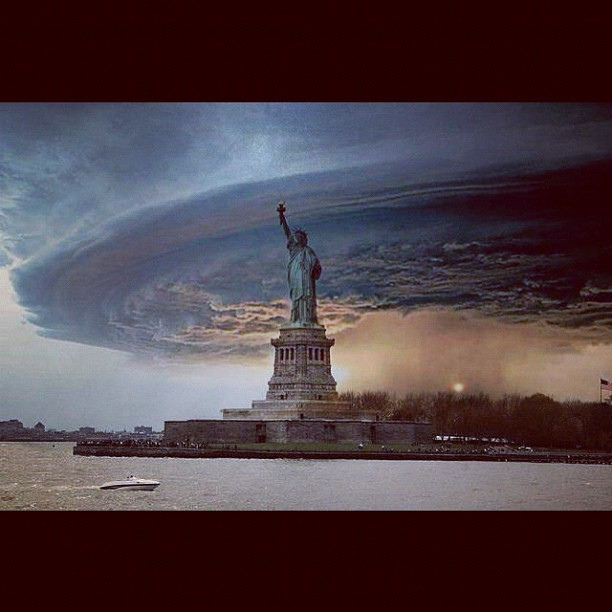 This has been a week that will go down in history because of a storm named Sandy!

As a native New Yorker, I am saddened beyond words for those who are suffering in New York and New Jersey. Some have lost everything. Their homes have been ruined by flooding and wind, others have lost their homes to fire like those families in Breezy Point, Queens.

Right now the news is reporting, 44,000,000 million people are without power due to Sandy. Power loss has a ripple effect, no heat, no hot water, no lights…life as many people knew it prior to Sandy will never be the same.

Some of my blogger friends are New Yorkers…they are moms with small children, who, over the past week have had their entire lives disrupted. Some were preparing to evacuate their apartments this time last week, they went to hotels which eventually lost power…their kids could not quite understand all that was going on around them… their parents had to remain calm on the outside despite being terrified on the inside. Many children slept through the storm surge to wake up to a New York City ravaged and forever changed…

Early Tuesday morning I, personally answered a tweet from a NYC mom living in Battery Park City…she asked if anyone knew what was going on outside. She had no other means of communication so it was difficult for her to find out that the neighborhood where she lived was impassable on many streets but the surge had in fact passed and thankfully the water was receeding leaving devastation behind. I told her in 140 characters what I had just witnessed in a report from Chris Cuomo on GMA…there was so much to tell her but it was good I was limited by Twitter. She thanked me and I sent her my good thoughts from my home here in Chicago…where I was safe and sound. This little tweet made me feel that I was able to help someone, so far away yet so close to my heart.

I have been following another young mom with three little ones who had to evacuate southern Manhattan. She is now back in their apartment but without power. From the sounds of her tweets she seems to be holding her own…although, I know she must be beyond the point of being overwhelmed…I wish I could hug and make dinner for her and her family. She continues out pictures and links which are sad to see but in person I cannot even imagine how she feels living in this huge city where some areas are totally dark at night and other areas are “business as usual”. But since she has no power and no television, she cannot see the Upper East Side functioning sometimes like nothing has happened. Oh Jess, this will pass but you are in the thick of it…hang in there as best you can. There has never been anything like this…how you and your family survive will go down in history as one of the 8 million stories in the asphalt jungle known as NYC.

One of the stories which blends horror and heroism is the evacuation of Langone New York University Medical Center on Monday night and then Bellevue Hospital on Wednesday.

I was once a nurse manager at NYU Medical Center and I can tell you that when it comes to reacting to emergencies they know what to do.

Firstly, years ago there was a strike of union hospital workers which left only managers, nurses and doctors working in the all NYC hospitals.  We went into emergency mode…all professionals banded together doing everything…from mopping delivery room floors to doctors giving cool baths to patients with fevers and managers running lab tests. It was survival and survive we did even though we knew that our nurse’s aides wanted to be by our sides rather than outside on a picket line but that is how unions effect change sometimes.

For a few days, it was fairly smooth going and then the union approved a contract and union workers returned to their jobs. We welcomed everyone back to work and nursing welcomed a salary increase along with those who went on strike…it is one of the benefits… at that time when union employees got a wage increase so did nursing.

The other emergency was  the “Blackout” in 1977, on a warm summer night during the terror reign of the Son of Sam,...it affected all of NYC.

Again at NYU Medical Center, we went into action, especially when one generator failed and we did not know if the other would last. It was a night of climbing 15 stories to the ICU and then running down to the 8th floor where women were in labor and back to 9 where babies were on ventilators. Everyone came together that night to maintain safety and calm in a situation which was anything but safe and calm.

In the morning, when I crossed First Avenue to my Kips Bay apartment building I was met by neighbors coming out of darkened stairwells with candles handing them off to those of us readying ourselves for the climb up in the dark.

New Yorkers have a way of coming together….I knew this but it was certainly driven home during my tenure at NYC Medical Center in the 70’s. We were a family within a family and nothing stopped us from caring for our patients who had put their trust in us.

Many years have passed and New York has since survived the unspeakable events of 9/11 and now New Yorkers are challenged again right to their core with Superstorm Sandy.

Sandy seems to have brought  New Yorkers to their knees…but out of the ashes (literally in some cases) they will rise, showing the world that they are survivors. They will come together and accept and welcome the helping hands from around the country and world.

As the water receeds, we will witness New York City come back better than ever.