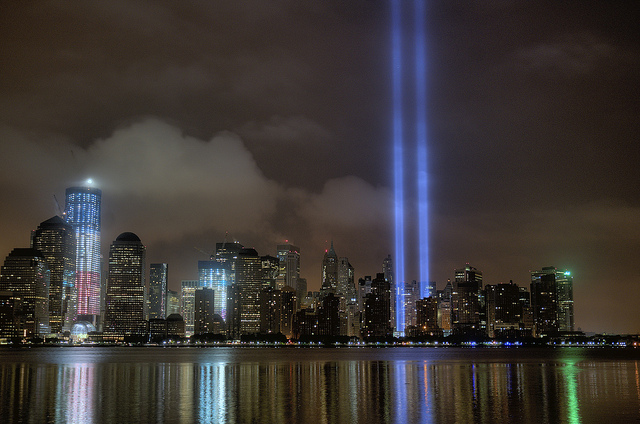 Graham Hagget was just 10 weeks old when his grandmother, Sandra Lee Wright, was killed in the World Trade Center attacks on Sept. 11, 2001. But he knows a lot about her, mainly from the stories his mother, Shelli Wright, has told him.

via Boy Grows Close To Grandmother, Through Memories :

I will always remember where I was on the morning of 9/11…the memory is forever etched in my mind as I am sure it is in yours.

It is the most horrific event of my time…

It seemed that everyone knew someone, who knew someone that perished in the events of 9/11…in the WTC….in the Pentagon … in a field in Pennsylvania.

Personally, I had the honor of meeting one of the NYFD’s first responders, a few months after 9/11.

He was working on the “recovery” at Ground Zero. He was from Queens  and he recently had recovered the remains of his own nephew, another fireman, who perished in the WTC. That late January afternoon, Bobby was with another of his nephews, also a fireman as they drank at Moran’s …a bar near Ground Zero. He was from a family of firefighters…a family of New Yorkers. Bobby had also been a first responder to the plane crash in Queens that occurred that same Fall of 2011.

He told me how as he and his “brothers” rode to the site of the WTC, they knew that some of them would not come back so they wrote their social security numbers on their limbs for identification…many were identified by their boots or coats ,which were labeled with their numbers and names.

As he told his story, I sat glued to my chair listening to every word, realizing that he was traumatized and was not the same person that left his home on the morning of 9/11.

I will never forget the events of that day…nor will I ever forget meeting Bobby, from the NYFD in Queens. I do know that his son is now a member of the NYFD and carries on a family tradition, a very proud one…of that I am sure.

Today, I remember all those who lost loved ones that day…

Here’s to the NYFD and the NYPD…today and everyday!