How I Found Out…

As many of you already know, my younger daughter, Adrienne is pregnant, expecting her first child. Our family is very excited to be welcoming another grandchild. In addition, I am overjoyed to welcome Adrienne to Parenting in the Loop. She will be writing about pregnancy and other topics as time goes on. Here is her first post! 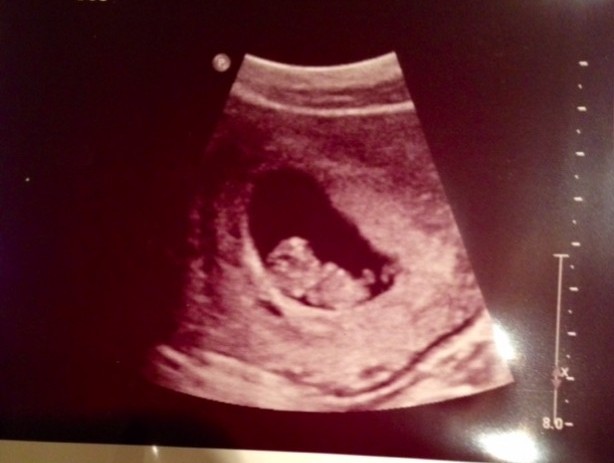 I flew to Chicago with my husband on Christmas day. We were there to visit my family and attend a wedding of a good friend of mine from high school.

My husband, Rich, and I got a hotel room where the venue was held in the city. We went to bed late after the festivities and got into an argument… about what? I couldn’t tell you. That’s how important arguments are sometimes.

The next morning, we woke up on the earlier side. I needed to get back to the burbs for an MRI on my knee and hip for an injury and pain that hadn’t subsided for about six months. I had gotten very little sleep because I had to get up numerous times to pee in the middle of the night. I thought it was just from all of the water I consumed to avoid getting a migraine. Anyway, we drove back to the burbs and I dropped Rich off at my parents’ and headed off to the MRI with my mom.

After checking in and changing into a gown, I left my mom in the waiting room while I followed the tech. Before starting, I told the tech that I had not been on any birth control and that it would be the smallest chance ever that I would be pregnant. She insisted that I take a test and I agreed to put both of our minds at ease. So I proceeded to the nearest bathroom to pee on a stick.

I thought nothing of it as I sat back on the table and waited. I watched as the tech handled my test. She waited and then she walked away with it. That’s when I knew. I definitely had an “Oh shit” moment. That was when “I found out“.

The tech came over to me and told me there was a faint line but that it kept getting darker and that I was pregnant. She was very careful with her words because she wasn’t sure how I was going to respond. I told her that I had just gotten married in October and was happy. She seemed relieved and immediately ushered me out of the room and back to my mom. My mom glanced up from her magazine and as soon as she saw me I knew that I didn’t even have to say anything by the look on her face.

Excited with the results of my visit and somewhat relieved that I shared the experience with the tech instead of waiting for what seems like the longest three minutes in the world, my mom and I headed home. On the way, I called my dad to tell him so that he would hear what I found out from me first. He was super happy!

When we returned home, Rich was confused as to why I was back so soon. I took him into the guest room and told him privately. You never know how a man is going to react. He was so happy that he cried.

I never thought that the easiest part of pregnancy was going to be actually getting pregnant. I was on the cusp of turning 34 in January and have been underweight my whole life. I also never imagined that my happiness would soon turn into fear and heightened anxiety…after I found out.