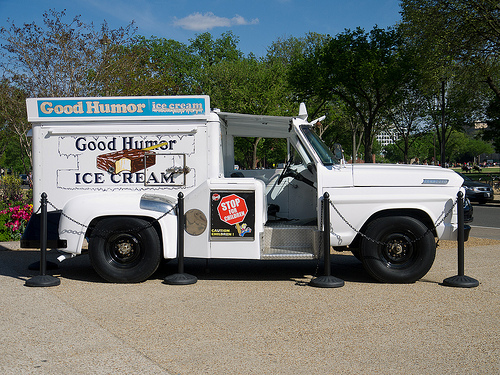 All I can say is what next?

Years ago, the Good Humor truck had bells,which the driver had to manually jingle when he was approaching his stops.

He also made regular neighborhood stops near my home in a very large New York suburb.

Truthfully, I am not so sure about ice cream trucks in general with all the “safety issues” and “food issues” that plague kids today…

It did make me think however, that I do avoid the ice cream truck on a regular basis and try to make healthier choices like frozen yogurt. I may be only fooling myself but it makes me feel better.

“The music is very important to us,” Zea said. “Because when we’re on the street, the kids, they listen to the music and they get excited. So they tell their mothers, ‘hey mom, the ice cream truck is coming.’”

The issue is also raised about how the ordinance may effect the safety of children around the trucks.

“If they stop playing music, then the driver is driving by (and the kids) won’t notice there is an ice cream truck and they might hit the kids,” Ice cream supplier Bob Bakshi said.