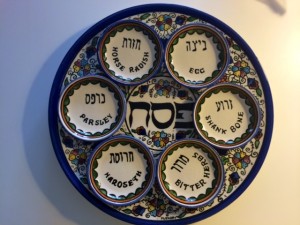 Both celebrations were Seders.

What I never learned about was the significance of the Seder plate.

I find joy in the celebration of both holidays which are full of joy, hope and rebirth.

Happy Passover and Happy Easter to all who celebrate!

How To Prepare a Seder Plate –

Ainsley closed her eyes, as if to shut out the embarrassment. The ongoing quest to understand why her young body was turning into a woman’s was not one of Ainsley’s favorite pastimes. She preferred torturing her 6-year-old brother and playing school with the neighborhood kids. (Ainsley was always the teacher, and she was very strict.)

“Tummy time” and “Back to Sleep” weren’t part of the playbook when Ginny Fountain gave birth a generation ago. This expectant grandma’s got a lot to learn about newborns, which is how Fountain, 64, wound up in a grandparenting class offered earlier this month at a hospital in Seattle.

But listening is a growing problem for young children to the extent that preschools are now finding it necessary to “teach” listening in some Pre-K programs. A parent recently left this comment on my post A Baby Ready For Kindergarten, College And Life:

Have a nice weekend… Happy Easter and Happy Passover!