Pregnancy and Anxiety… by Adrienne Lavine 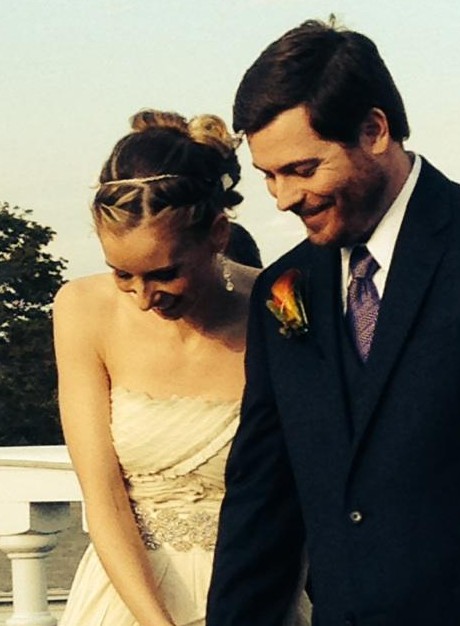 Less than a year ago this was me getting married last Fall in Newport, Rhode, Island. We were nervous as newlyweds but now we are about to become parents and it is a whole  kind of nervous.

I have had especially high anxiety during this time in my life.

My brain and mind are always on the go. Falling asleep at night is not a problem because I am just so tired but I usually wake up at least once for an extended period of time. I lie awake usually up for about two hours or so. Sometimes I even wake up gasping for air and other times have erupted into full-blown panic attacks. Sometimes I know what caused the panic attack and other times I have no idea.

Women and Infants Hospital has a very specialized program that caters only to women who are pregnant or new moms who suffer from anxiety or depression. Having either one of these conditions during pregnancy increases the chance of having problems postpartum. I am trying to avoid these issues. Wanting to be as physically and mentally healthy as possible inspired me to call and make an appointment for an evaluation of my anxiety. I was not looking for medication so I was set up with a clinical social worker. My initial meeting with the social worker was for about an hour. Together we reviewed my medical history and talked about my anxiety and certain aspects of my life that maybe relevant to my anxious feelings.

Truthfully, there are so many things that I am anxious about when it comes to becoming a new parent. I worry about finances, being a good mother, labor and delivery, the change in my lifestyle (all common things for a pregnant woman). We also discussed feeding, birth control after delivery (it seems a little early but I realize it is all important stuff) and it is all cumulative when it comes to disrupting my sleep. 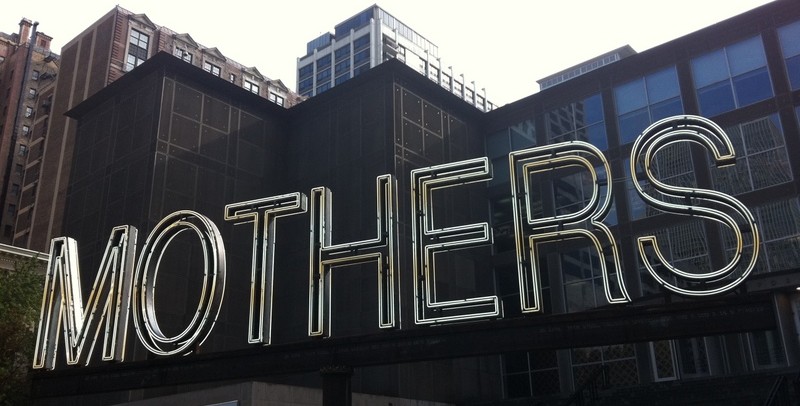 The social worker decided that I did not need to attend the Day Program offered at Womens and Infants. Instead, she referred me to two therapists who were closer to where I live. Both of who are clinical social workers.

I am not ashamed to say that I’ve been seeing a therapist on a weekly basis with whom I really connect. I am proud that I’ve taken control of the situation to better myself. I know that I did myself a favor by getting help as soon as possible. Talking with someone who is objective works for me and I couldn’t be more grateful to be surrounded by such a wonderful network of support during this important time in my life as I get ready to be a parent.

First Trimester (in a nutshell) by Adrienne Lavine

I had no nausea and no morning sickness but I was rid with anxiety with a touch of depression. Living half way across the country from my family and the bitter cold winter with a snowstorm every other day did not help. 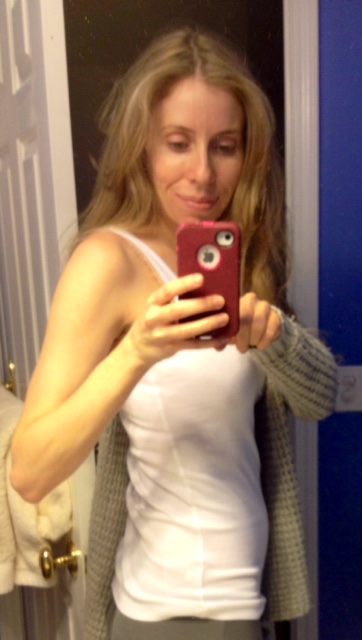 I taught yoga through my first trimester. However, not having a regular 9-5 job, not having family nearby and not having as many friends around is very hard, especially while pregnant. All I wanted to do was to go home and be with my family. My husband was annoying me but when he wasn’t around, I wanted him to be home. I couldn’t win and neither could he.

In addition to the homesickness, boredom and loneliness during my first trimester, I was also experiencing panic attacks. I decided that I needed to go and be with my family so I traveled to Chicago at the end of February. It was supposed to only be for a week but ended up to be a three weeks.

I spent a lot of time with my mom. She took me shopping and bought me some new bras that I desperately needed and some brightly colored maternity clothing that cheered me up. My mom is also an incredible cook and made sure that I had good food and enough of it! I even relaxed to the point of being able to take a nap and sleep through the night for the first time in weeks. Trust me that was a big deal.

Having family nearby has so many benefits, although my husband doesn’t fully understand why I want my mom so badly. I am close with my family and tell my mom everything (she jokes sometimes that I probably tell her too much). The amount that I wish to spend more time with my mom will never change and certainly won’t during pregnancy.

The day before I was supposed to return to Rhode Island was week 13. My mom and I thought it would be nice to be able to get an ultrasound done so that she could experience something special with me. We decided to go and have my husband on Face Time. The tech asked if my husband and I wanted to know what we were having… Absolutely! She knew that it was on the early side and was pretty sure it was a boy. My dad walked in the room and it was like he had a reaction. “Oh. It’s a boy!”

Very excited with the news of finally adding a male to the family, we all waited for the tech to bring the DVD of the ultrasound. It was such a happy experience to be able to share with everyone special to me. Plus, I could stop referring to the baby as an “it”.

When I got back to my parents’ house I called Rich to talk. I was supposed to fly home late Tuesday night and would have arrived after midnight. He was going to leave work early on Friday to go on a snowboarding trip to Vermont. I decided to stay in Chicago for an extra week. There was no point in going back to Rhode Island just to be alone for the whole weekend.

The following Tuesday rolled around and my new flight was in the afternoon. I was nervous just at the thought of going back. I was also nervous of flying alone and being alone all of the time.

My mom was driving me to the airport. We were approaching Midway when I had a panic attack. My mom drove the car into one of the garages and parked. After I had calmed down we called my dad. We canceled my flight and booked another for a week later. Then we called Rich. I was still very upset so my mom told him what had happened. He was very understanding and just wanted me to feel better. We ended up flying Rich to Chicago on Saturday so that he could fly back with me on Tuesday. We made it to Rhode Island with a minimal amount of anxiety.

First trimester was full of emotional and physical changes…looking forward to what’s next. 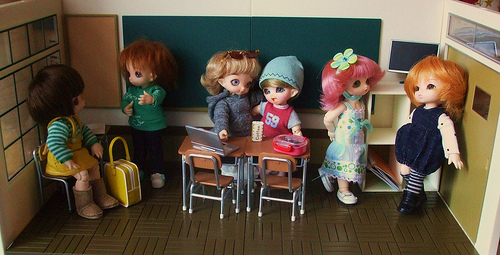 Most of us can remember our first days at school and the jitters that we felt. Sometimes, these jitters were happy ones…getting back back to the books and classroom meant seeing our friends again after the long hot summer.

It also meant slipping into a familiar routine which we know can be consolingly comfortable.

At times though, anxious worries can spoil the fun of the return to routine mornings, scheduled daytimes, and earlier bedtimes.

As a parent, I can remember struggling with the after Labor Day schedules. Here are some pointers to remember when parent anxiety rises.

But remember, an empathic ear can give you a heads-up to situations before they hatch into problems.

Postpartum depression is a serious problem that can occur after having a baby…it can occur up to one year after delivery. Sometimes the signs and symptoms can just be an overall sense of anxiety and an inability to enjoy your baby.  As a new mom if you just don’t feel happy you can attribute it to many things especially lack of sleep and the many changes occurring over such a short period of time but you could be suffering from postpartum depression (PPD).

Personally, I did not experience PPD but there were days when I did not feel in control of all the responsibilities of motherhood. It was positively overwhelming. Back in the day…postpartum depression was somewhat overlooked and under treated.  A new mom was made to feel like she  “just had to suck it up” and get it together. Fortunately, since them that attitude has changed and most obstetricians screen for PPD at the time of the postpartum check-up.

I thought that I would post a list of symptoms of postpartum depression.  If you have more than one or two of these symptoms or are feeling generally depressed for more than two weeks you should check in with your doctor.

The symptoms of postpartum depression are the same as the symptoms of depression that occurs at other times in life. Along with a sad or depressed mood, you may have some of the following symptoms:

A mother with postpartum depression may also:

Mental Health Awareness Week
Depression, anxiety and panic attacks are NOT a sign of weakness. They are signs of having tried to remain strong for way too long. Would you post this on your wall, at least for one day? It’s Mental Health Awareness week. Did you know that 1 in each 3 of us will go through this at some point in our lives? Share the support! Let those who struggle know they’re not alone, they… are loved.

As a clinical social worker and registered nurse I consider mental health as part of overall health. Personally, I have had bouts with anxiety and panic attacks as a young adult and anxiety rears its ugly head every now and then. Mindfulness and yoga has been part of my lifestyle for a very long time and has seriously helped me in times of high anxiety.
Anxiety is worry about the future and depression is related usually to past events none of which we have too much control over.
If you are a parent or you have kids that experience depression, anxiety and or panic attacks…know that there is help available. Please find a mental health professional that you like and respect to help you. You can always start with the NASW (National Association of Social Work)…they will help you find professional assistance.

Parents worry…it is sort of their job as I see it.

Here is an interview which may help you with some of those worries and make you a little less riddled with anxiety.

Parenthood is not easy. Worrying of course does not really help anything. Enjoy your baby and child and try to live in the present and plan for the future not worry about it.

I hope this article helps.

“Almost from the moment you know you’re pregnant, it begins — a cascade of anxiety touching on everything from health to finances.  And as your child grows, so do your worries.  Can she subsist on a diet of crackers and cereal?  Why is he struggling to read?  Our goal is to put these thoughts to rest. We asked readers on parents.com to share their biggest kid fears and got experts to weigh in with smart coping advice